President Trump wants to "cure the illnesses that plague us." That means we must invest in R&D

The United States can lead the world toward President Trump’s vision of accelerating cures for diseases that have plagued humanity, but not if we retreat from international engagement and development efforts—including strong engagement in global health R&D. 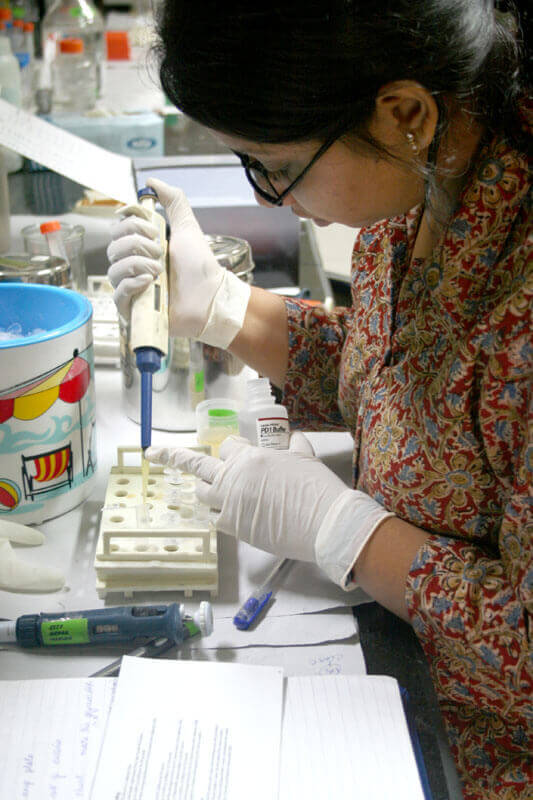 A laboratory technician. Photo: PATH/Satvir MalhotraThe United States leads the world in research and development (R&D) for rare and neglected diseases, but we still need to take action to unlock scientific potential and accelerate the development of urgently needed drugs, vaccines, diagnostics, and other health tools. This message of leadership and potential long championed by GHTC was shared by President Trump in his first address to Congress on February 28th when he told the story of Megan Crowley, a twenty-year-old college student who, despite being diagnosed as an infant with Pompe Disease, a rare and incurable genetic disorder, is alive today thanks to innovative R&D that yielded an effective treatment.

US leadership in medical and global health research has a tremendous track record of delivering new and innovative technologies for rare and neglected diseases that save lives in the United States and around the world. Scientists at the National Institutes of Health (NIH) first identified the HIV virus as the cause of AIDS and led the development of the first antiretroviral drugs. An estimated 14.4 million life-years collectively have been gained through the use of NIH supported HIV and AIDS therapies since 1995. US research supported the development of the GeneXpert diagnostic test for tuberculosis (TB)—the first test to rapidly diagnose drug-resistant and extensively drug-resistant TB, poised to be one of the world’s greatest infectious disease threats. USAID supported the development of Coartem Dispersible—the first artemisinin-based combination therapy specifically dosed for children, making malaria treatment safe and effective for all ages. President Trump is right: with a commitment to harnessing American innovation and ingenuity, “cures to illnesses that have always plagued us are not too much to hope.”

"Cures to illnesses that have always plagued us are not too much to hope.”—President Donald Trump

To achieve this goal, however, we must look at all the components that drive global health R&D. In his speech, President Trump identified regulatory processes as a primary barrier to innovation and access to new medicines, but there are other factors that must be considered. While there may be ways to streamline regulatory review to accelerate access to life-saving innovations, we ultimately want to advance American leadership in R&D that delivers safe, effective, and rigorously reviewed treatments for neglected diseases and conditions. This cannot be achieved by reducing regulations alone.

First and foremost, sustainable, predictable funding is critical. It takes years of research and a reliable flow of resources to develop new drugs, vaccines, and other health tools. We cannot address rare and neglected diseases effectively with cuts to medical research funding, dramatic ebbs and flows in discretionary spending, or by relying on emergency allocations of R&D resources during a crisis. Indeed, one of the crucial successes in the search for treatment for Pompe Disease was the mobilization of US$100 million for research. The US government has the power to unlock scientific potential and catalyze R&D through dedicated funding, and support for partnerships that leverage government, private sector, nonprofit, and other donor funding.

We also must recognize that that diseases do not respect borders, and investments that help diagnose, treat, and eliminate diseases overseas are investments that benefit the United States along with the rest of the world.

We also must recognize that that diseases do not respect borders, and investments that help diagnose, treat, and eliminate diseases overseas are investments that benefit the United States along with the rest of the world. In fact, investing to address disease threats before they reach the United States is more efficient and cost-effective—and saves more lives—than waiting until diseases reach our shores to invest. This means that the entire world must be equipped with the necessary tools to address emerging and longstanding threats, no matter where they are. The United States can lead the world toward President Trump’s vision of accelerating cures for diseases that have plagued humanity, but not if we retreat from international engagement and development efforts—including strong engagement in global health R&D.

The United States can lead the world toward President Trump’s vision of accelerating cures for diseases that have plagued humanity, but not if we retreat from international engagement and development efforts—including strong engagement in global health R&D.

We share the same goal: to harness American innovation to strengthen US leadership in health R&D, keep American people safe from rare, neglected, and longstanding disease threats, and make sure that people around the world gain access to new medical innovations as quickly as possible. There is no one silver bullet to achieve this goal. To truly commit to innovation and unlock cures for long neglected diseases, we must adopt a holistic view and ensure that US support for innovation and R&D—including funding—remains strong and robust.

Courtney Carson is a policy and advocacy officer at GHTC, who leads GHTC's US advocacy portfolio.

Matthew Robinson is a policy and advocacy officer at GHTC who leads the coalition's multilateral advocacy work.

Written by Kat Kelley / GHTC
Read time:
In this regular feature on Breakthroughs, we highlight some of the most interesting reads in global health research from the past week. Nearly three-fourths of new and emerging human diseases are zoonoses, animal diseases that spillover into humans. Now, scientists are reporting “spillback” of human diseases into monkey populations in South America, as Zika virus becomes endemic and as Brazil faces its worst yellow fever outbreak in years. Human strains of Zika have been found in black-striped capuchin monkeys and marmosets, a concerning trend as these species could become a reservoir for the virus. Capuchins are often kept as pets, employed as street entertainers, or hunted as meat, and these routine interactions could lead to future human outbreaks. Meanwhile, Brazil’s yellow fever outbreak has killed nearly 70 people and more than 600 monkeys, threatening rare and endangered species in the Atlantic rainforest. Researchers at the University of Southampton have designed miniscule 3D spheres that can simulate conditions inside the human body, an exciting development that could help scientists better understand how pathogens interact with human cells. The researchers created one such sphere with a collagen matrix, similar to the makeup of human lungs, to study antibiotics that target and kill the tuberculosis bacterium. The 3D spheres can be used four times longer than existing 2D systems, enabling researchers to monitor the progression of infections over time. Colistin is often the last line of treatment for multidrug-resistant infections, however, its use as a growth promoter for livestock in China has led to the development of colistin-resistant bacteria on chicken farms. While colistin resistance was first reported in China in 2015, it has now spread to 25 countries across four continents. Scientists have discovered a specific gene (mrc-1) that confers resistance to colistin and that can be easily spread between bacteria. Now, a new study has revealed that mrc-1 is much more prevalent than previously believed. The gene was found in nearly all bacteria collected from chicken farms in China, even though only half of the samples proved resistance to colistin. The findings also suggest that flies may be accelerating the spread of colistin resistance by transporting resistant bacteria from farms to surrounding communities. A cocktail of three bacteria-killing viruses could provide rapid protection against cholera, filling a critical need during outbreaks, as vaccines do not provide protection until approximately two weeks after administration. The technique is known as phage therapy as it utilizes bacteriophages—viruses that target and kill specific bacteria. While phage therapy has been around for nearly a century, it was largely eclipsed by the advent of antibiotics, but has gained increasing attention in recent years in response to the growing threat of antimicrobial resistance. To develop the regimen, researchers at Tufts University School of Medicine first identified phages that target the cholera bacterium, and then narrowed their focus to those that can survive and function in the human small intestine, where cholera infection takes place. Animal studies suggest that the cocktail could prevent infection when taken just three hours prior to exposure. The research team has established an independent company, PhagePro, and plans to further test and develop the therapy.